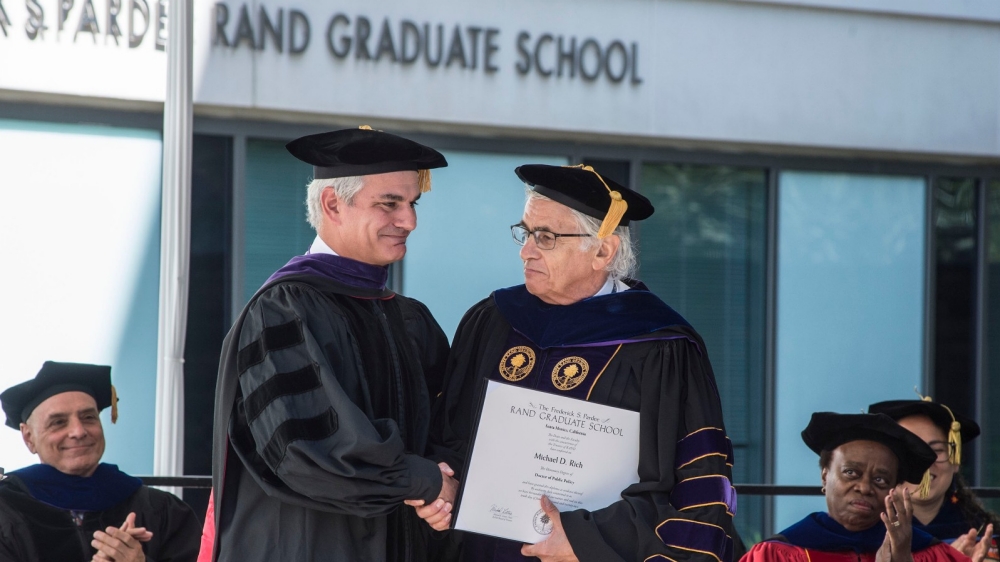 Michael Rich (right) receives an honorary Ph.D. from Pardee RAND, presented by Michael Leiter, chairman of the RAND Board of Trustees

To families and friends of our graduates, Pardee RAND faculty, Chairman Lovelace and the Board of Governors, Chairman Leiter and RAND trustees, RAND staff and alumni, Dean Emeritus Marquis, President-Elect Matheny, our impressive honorees, and other distinguished guests, I join the Dean in welcoming each of you to RAND’s headquarters campus on this wonderful day.

And, to our graduates, the primary reason we are all here: Congratulations! You have completed a program of remarkable breadth and rigor . . . and you have done it during an especially challenging time. Each of us feels a special pride in you, as well as great confidence that you will go on to make, to lead, and to inspire important contributions to society in the years ahead.

For more than 60 years, RAND has published an annual calendar with inspirational quotations. It’s one of my favorite RAND traditions.

Back in 2014, the quotation for April was my favorite line from Les Misérables. I was always disappointed that the line didn’t make into the musical. Disappointed again that it didn’t make it into the film. It’s only in the book . . . and the 2014 RAND calendar.

The quotation comes from the section of the story when Jean Valjean and Cosette are living incognito in Paris. Victor Hugo wrote an entire chapter about the overgrown garden on their compound that served to conceal their houses. The chapter includes a very detailed passage about the interconnectedness of nature. It is fascinating to read, but what caught my eye about halfway through the chapter were these two sentences, a statement and a question:

Where the telescope ends, the microscope begins. Which of the two has the grander view?

In the book, Hugo leaves that question unanswered, hoping, I am sure, to get readers like me to ponder it. I like the question because I think it has special meaning for policy analysis, particularly the kind invented, refined, and practiced here at RAND. That is why I chose it for the RAND calendar eight years ago and why I decided to bring it to your attention this morning.

So, which has the grander view? Both reveal truths that are not observable with the ordinary eye. The telescope enables us to see far into the distance, beyond our immediate horizons, and beyond our reach. The microscope enables us to look deeply, closely, to reveal the hidden workings of what’s all around us. Both often show that what might at first seem obvious or simple is anything but that.

Much of what you have learned in the Pardee RAND classrooms probably seemed like looking through a microscope. You’ve learned how to use advanced data collection techniques, statistics and economic modeling, complex computer simulations, rigorous case studies, and a lot more. Those are tools we use to unpack trends, distinguish correlation from causation, reveal hidden costs, and surface latent opportunities for savings. You’ve learned how to use those tools to dissect policies and programs—breaking apart systems into essential elements, searching for the factors that matter most in producing desirable outcomes, devising ways to reconfigure the pieces to produce a more effective, more efficient, more equitable whole.

But, because you’ve been an integral part of RAND, which specializes in attacking the toughest and most consequential challenges of the day, in mounting multi-year and multi-faceted attacks on complex policy problems, you’ve also had a view through the telescope. You have had a chance to lift your head from the focused field of the microscope:

In short, I hope you’ve had an opportunity to think about society’s largest challenges, even when—and perhaps especially when—those challenges are too big, too complex, and seemingly too distant to be on current policy agendas.

So which has the grander view—is it the microscope or the telescope? My answer to the Victor Hugo question is that the grandest view of all for a policy analyst is the view that combines the telescope and the microscope. I predict that you will find that your experience in two interlocking institutions, the Pardee RAND Graduate School and the RAND Corporation, has served you well because it has given you the opportunity to be exposed to the power, as well as the limitations, of both the microscope and the telescope. That’s an experience that is unmatched among your counterparts at other graduate schools. And it’s always why I have always been so proud of—inspired by—the RAND–Pardee RAND “entanglement.”

I am afraid that the policy problems you will tackle in your careers will be more challenging than the ones I have addressed in mine. The world is more complex than ever, and there are many factors with potential to make it even more dangerous, but, in my mind, one challenge looms over all the rest.

For nearly two decades, I have been preoccupied—even obsessed at times—with a challenge that, in my judgment, is more pernicious and more difficult than all the rest. You will encounter it if you work in public service, but you will also encounter it as a citizen. I am referring to the diminishing role of facts and analysis in public life:

What I have called “Truth Decay.”

Newton Minow, who chaired the Federal Communications Commission in the Kennedy Administration and who chaired the RAND Board of Trustees when the Pardee RAND Graduate School was established, has called “Truth Decay” the existential threat of our time.

In my view, every member of the RAND community, but especially those with degrees from Pardee RAND, must become vigilant defenders and active proponents of the proposition that when solving public policy problems, facts matter, just as they do in every other walk of life. Rigorous and objective research and analysis make a difference.

Each of you came to Pardee RAND with a special combination of experience, intelligence, vision, and passion. You leave with all that, plus an unmatched set of analytical skills. I know that each of you will accomplish a lot and that you will do so in many varied settings. But, no matter where you go or what you do, I hope each of you will join me and RAND in the fight against Truth Decay.

Our future and that of our children depends on the outcome of that fight.