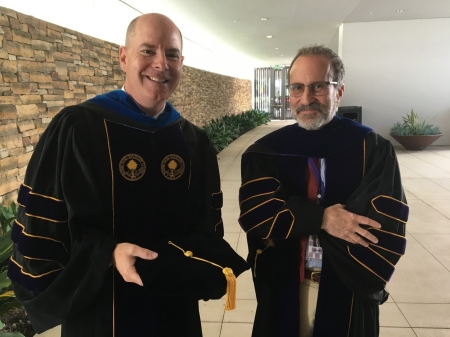 Ted Harshberger (cohort '86) and Jeffrey Wasserman ('85) have long — and strong — ties not only to Pardee RAND but to the RAND Corporation itself. Ted is the Vice President and Director of Project AIR FORCE, and Jeffrey is the Vice President and Director of RAND Health. So it is no surprise that — when it comes time to support their alma mater and their company — Jeffrey and Ted don't hesitate.

After receiving his Ph.D., Jeffrey worked for MedStat for 13 years before returning to RAND. Since 2006 he has been a Pardee RAND professor and, for three years, he was the assistant dean for academics.

"My involvement with the Pardee RAND school—as a faculty member, dissertation committee member, and Assistant Dean—has been one of the most rewarding aspects of my RAND career," Jeffrey says. "The quality of the program started off high and increased substantially over time, and the students are absolutely amazing!"

“My involvement with the school has been one of the most rewarding aspects of my RAND career.”

Ted worked for RAND immediately after receiving his Ph.D., in such roles as director of the Aerospace Force Development Program in PAF; director of the Strategy and Doctrine Program in PAF; and associate director, Operations and Planning, in the RAND National Security Research Division. He took a six-year hiatus to work in the private sector, returning to RAND in 2012.

"I attended Pardee RAND when it was a much smaller place (with a different name!) and enrolled while still a member of RAND’s staff," Ted said. "At the time, I valued a sense of being among a vanguard in a new academic field that was so closely aligned with RAND’s mission.

"Since that time, I have watched the school blossom into a larger, stronger, and more diverse institution," he added. "But what has remained constant is the commitment of the students, the excellence of their training, and the value that they bring to the wider world in so many fields. I am proud to remain a part of such a dynamic force for progress."

“I am proud to remain a part of such a dynamic force for progress."

Jeffrey added, "Our graduates have enabled us to send literally hundreds of ambassadors out into the world with the mission of making better public policy through RAND-style analysis." His enthusiasm for Pardee RAND's redesign also encourages his support: "The School is in the process of transforming itself in ways that will likely produce large dividends with respect to its impact at all levels of government here and abroad, as well as in the private sector."

Ted and Jeffrey's enthusiasm for Pardee RAND, its students and RAND shows up in their philanthropy. They regularly give to RAND and to Pardee RAND. Additionally, Jeffrey’s family established the Arthur S. Wasserman Prize for Reducing Social and Economic Disparities (to honor the memory of Jeffrey’s dad), which for the past five years has allowed Pardee RAND to provide support to students who are just beginning the doctoral dissertation process.