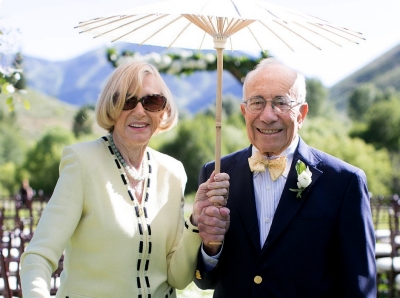 Artist and benefactor Theresa VandeWint Wolf passed away in early August. The widow of Pardee RAND founding dean Charles Wolf, and a supporter of the school in her own right, Wolf is remembered fondly by faculty, alumni, staff, and students. A memorial service is planned for September 27.

Born in the Netherlands and raised in Vancouver, Wolf spent the last 65 years in Southern California.

She studied art at UCLA, becoming an artist and a master serigrapher who exhibited widely in galleries in California and Europe. She was also president of the Westwood Art Association. Pardee RAND is fortunate to have a few of her pieces on display.

During their 69 years of marriage, the couple lived and traveled throughout the world, meeting heads of state, diplomats, and the former Emperor of Japan.

A public memorial service will be held at Westwood Presbyterian Church, 10822 Wilshire Blvd. in Los Angeles, on Friday, September 27, at 5:30 p.m.

Wolf was an avid member, supporter, and deacon of the church. Her participation in the choir gave her great joy.

Her son Tim, who is carrying on his parents' legacy of supporting Pardee RAND, welcomes the school's faculty, alumni, staff, and students to join the family at the service.

"Since our Mom was an artist, and she loved bright colors, we would ask that you wear bright colors or white. My mom would have hated funereal black or navy blue at her memorial!" he said, adding that he plans to wear "a bright blue suit and a bright yellow — my Mom’s favorite color — tie."

After the service a cocktail reception will be held in the adjacent hall.

"Some of our Mom’s art will be on display and available after the service," Tim Wolf added. "If you see a piece you like, I know my Mom would appreciate a small donation to the Church, should you be so moved."