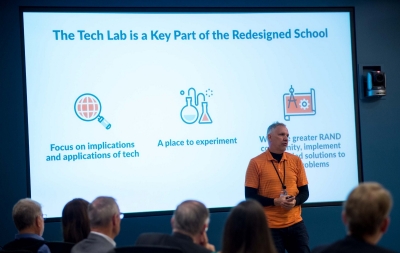 Preston McAfee, one of the founding members of the group, participated in Pardee RAND's reimagining efforts

To help guide the development of Pardee RAND's Tech & Narrative Lab, director Todd Richmond and Pardee RAND dean Susan Marquis have assembled a veritable who's who of tech policy leaders to serve on the lab's new Advisory Group.

The inaugural members are:

Marquis commented, "The Tech and Narrative Lab is breaking new ground at RAND and in public policy schools with the hands-on cutting-edge application of technology to policy problems. We’ll be using the TNL for experimentation, rapid prototyping, development with a focus on the applications and implications of new technologies to the public interest."

Richmond said of the advisory group, "It provides strategic guidance for the structure and function of the lab, with a mix of academic and private sector viewpoints and expertise."

The group met in June and Richmond plans to have them get together annually, with virtual meetings — of course — each quarter.