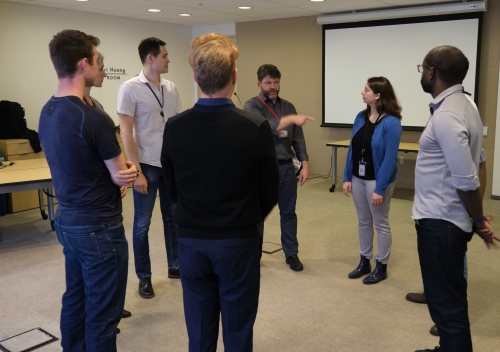 Dan O'Connor leads a group in an improv memory exercise.

At a Tech & Narrative Lab-sponsored workshop earlier this month, students and faculty learned that improv isn't just about comedy; it is about how to deal with uncertainty and improve your ability to convey information.

The workshop was a refreshing and unusual experience," Lilly said. "I learned that my colleagues have hidden talents and an awesome sense of humor."

Haak agreed. "I loved it!" he said, adding that it was "a fun way to be vulnerable with co-workers and play some new mental games.

"It helped bring awareness to interpersonal skills that I had and some that I lacked," he continued. "It was impressive how they taught through doing, and how much we smiled."

O'Connor and Kearin are veterans of the improv and theater worlds, and they regularly perform locally and nationally. In addition, they have led a variety of workshops for corporate clients such as Cisco, KPMG, Ernst & Young, and others.

“The main lesson for me was the importance of being attuned to the ideas of others in a collaborative setting.”

For the group at Pardee RAND, the workshop focused on deep listening and the concept of the "second circle" — where individuals are neither withdrawn (first circle) nor highly overt (third circle). The group explored a variety of exercises, all in the spirit of improvisation and play but with reference to how the skills are applied day to day. A key concept was that no one was expected to be "good" at the exercises. Rather, it was an opportunity to struggle and fail while having some fun. As Kearin noted, "mistakes are a gift."

One of the games involved having the group in a circle and the first person saying any word that came into their head. The person next to them responded with whatever that word triggered, then the next person, and on around the circles for multiple turns. As one would expect, the words were diverse and a bit chaotic. After three times around the circle, O'Connor stopped the group and told everyone to recreate the process, using the same words they did the first time.

"Frankly I was panicked at first" said TNL director Todd Richmond. "I was trying to recreate the exercise in my head and there were just too many random words. But O'Connor reminded us that the first time we were only responding to the person to our right, so we only have to remember that interaction. And sure enough, the group flawlessly recreated the first set of improvisations."

When someone says, "improv," often people will immediately think of something like the TV show Whose Line Is It Anyway. But as Kearin and O'Connor pointed out through their exercises, improv is about much more. As Richmond noted, "The skills of deep listening, being receptive and open, and having a mindset that is OK with discomfort are tools that can be used in a wide variety of circumstances."

Karimov agreed. "The main lesson for me was the importance of being attuned to the ideas of others in a collaborative setting and how difficult it can be to prioritize other’s thoughts before your own," he said. "This is certainly a mental 'muscle' people should exercise more often. It’s also a great team-building exercise."