Last Week Tonight Cites Alumni Research on Medicare for All 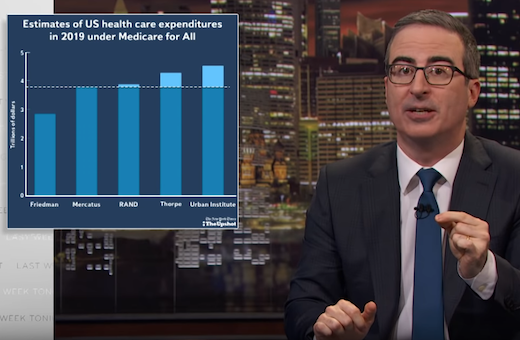 The chart appears at 5:20 into the segment

Pardee RAND alumni Jodi Liu (Cohort '12) and Kenneth Thorpe ('80) have seen their Medicare for All cost analyses cited in numerous media, but a recent mention was more unusual than most.

The HBO late-night comedy news program Last Week Tonight with John Oliver featured an in-depth look at the topic on February 16 — and included a chart first published by the New York Times that included Liu's and Thorpe's estimates.

Oliver's 20-minute segment makes liberal use of what could generously be described as "salty language" but makes the valid point that it is difficult to calculate the cost of Medicare for All because there are several proposals and the subject is so complex. The chart, mentioning studies by "RAND" and "Thorpe," appears at around minute 5:20.

On Twitter, fellow alum Jon Wong ('12) credited and linked to Liu's work, which stemmed from her dissertation research.

That little bar chart at 5:20 comes from my @PardeeRAND classmate @jodilliu's dissertation and subsequent research.

It ain't easy to do the hard work of interpreting facts and acknowledging uncertainty, but it's all right here: https://t.co/q6ub2UrotJ https://t.co/Mq5Z8Msvoz

Liu and Thorpe originally found their work compared in a feature by the New York Times in April 2019. Since then, their estimates have been discussed in Newsweek, the Washington Post, and numerous other outlets.

Liu has also been quoted by Boston's NPR station, WBUR, and by Kaiser Health News, and she was recently quoted in Teen Vogue:

"It’s all about shifting the spending," Liu explains. "Medicare for All is fixing the finances to fund the system." As for the possibility of an increase in taxation, Liu says, "People are not feeling how much [of their money] is going into the health care system with payroll taxes and employee contributions. With a federal entity, it will be more explicit. Out-of-pocket costs will go down and instead of people paying deductibles and copays, it’s through taxes. But no one will face financial barriers when they are seeking care immediately."

For his part, Thorpe's research was featured in Vox when it was first published, and it has been cited by former Vice President Joe Biden, as noted in The Atlantic.

As chair of the Department of Health Policy and Management at Emory University's Rollins School of Public Health, Thorpe participated in an expert panel during February's Atlanta ACG Capital Connection conference on the topic "Healthcare 2020: How Healthcare Investors should prepare for the November Elections." He has also been quoted for his expertise in the Washington Post, Forbes, the Wall Street Journal, and numerous other media outlets.

Watch the "Medicare for All" segment on Last Week Tonight