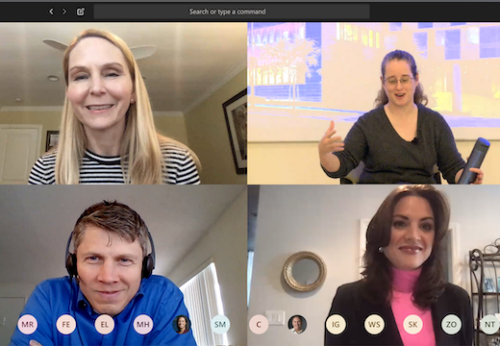 In lieu of the normal in-person Preview Weekend, to accommodate coronavirus-related travel restrictions, Pardee RAND hosted a Virtual Preview Day on Friday. More than three-fourths of the school's admitted students attended from locations around the world, as dozens of current students, staff, faculty, and RAND researchers. With video sharing, real-time Q&A sessions, and one-on-one meetings, it was a rousing success.

Dean Susan Marquis, showing her excitement about the event, commented, "It was really rather extraordinary, since we had audio and video for admitted students from around the world — Nigeria, Afghanistan, Ukraine, Somaliland, Brazil, Mexico, and of course all over the U.S. — plus about 15 current students, faculty, and staff."

The 5-hour event began with Stefanie Howard, assistant dean for admissions and strategic initiatives, describing the day's agenda and asking each of the admitted students to turn on their video, unmute their computers, and introduce themselves. Some of the international attendees noted that they were actually happy to have a virtual option, as they would not have been able to fly in for the in-person event. 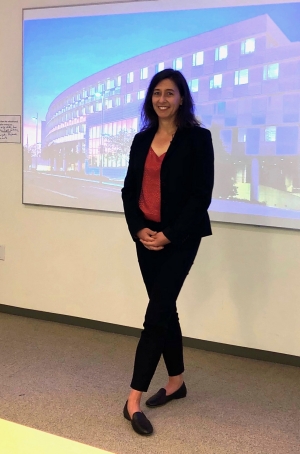 Many of the initial interactions were much more social than academic. When Dean Susan Marquis introduced herself and noted her hobby as a cheesemonger, for example, several students commented that they loved cheese. When one admitted student commented in her introduction that she loves Harry Potter and had read all the books 20 times, a chorus emerged in the chat that the school should develop a Quidditch club or have a Harry Potter trivia night. Staff chimed in, sharing that RAND has social clubs and events for cyclists, hikers, surfers, singers, wine lovers, crafters, and much more.

During the introductions, admitted students also started what would become a long online chat thread. Over the course of the day, they interacted with each other, commented on each others' introductions, and asked questions of staff, faculty, and current students.

Of course, the overall focus was largely academic and practical, but when admitted students attend a preview day or weekend, part of the goal is to see if they feel at home both academically and personally.

After the introductions, the dean officially welcomed everyone to Pardee RAND and introduced the academic program, notably the three streams of policy engagement that will officially and fully launch this fall.

During this and other sessions, moderators read the chat and asked live questions based on what they saw being discussed, while some staff replied directly in the chat area. 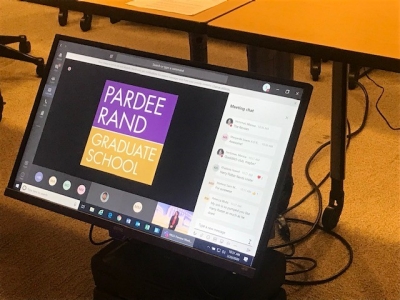 Several of the moderators participated on-site at Pardee RAND. A large monitor on the floor helped them see the chat. 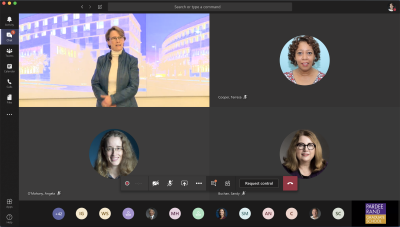 The day ended with each admitted student being paired with a RAND researcher for a one-on-one video chat. Each student had indicated several researchers whose topics they found interesting, and Pardee RAND matched them with available faculty and researchers.

However, that didn't end the outreach. "We are following up the Preview Day with 'Fireside Chats' with each of the OJT brokers this week, using video chat to continue the discussion and engagement around this most unique feature of the program," said Howard. "We are also matching student volunteers as 'virtual buddies' with each member of the admitted cohort."

Dean Marquis said after the event ended how pleased she was with the way the school was able to pivot to a digital, interactive offering, and how well it went.

"The extraordinary work of Stefanie and the whole Pardee RAND and RAND team resulted in what was a perhaps surprisingly successful and personal experience for admitted students, current students, faculty, and Pardee RAND staff," Marquis said. "It was awesome and powerful for all, with more than one dean and admitted student choking up a bit when we realized the power of us coming together."