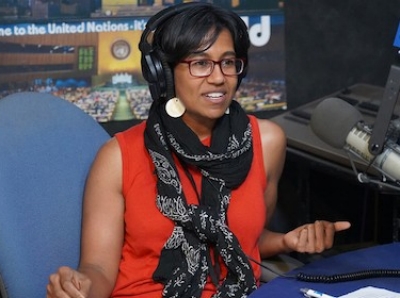 Sinduja in her first podcasting role, for the United Nations UNcomplicated series

Alum Sinduja Srinivasan (cohort ’09) works for the website FiveThirtyEight.com as a podcast producer and describes herself on LinkedIn as an “Audio Storyteller.” Her career pivot began in 2019 while working as an Evaluation Officer for the United Nations. She is spearheading this year’s Career Services (Virtual) Student Research Showcase, helping Pardee RAND students transform their innovative research into compelling stories.

Pardee RAND caught up with Sinduja to learn about her careers—first in research and now in podcasting—as well as what she’s learned about herself over the course of the COVID-19 pandemic and what advice she has for the next generation of policy analysts—and communicators.

You started at the UN through its Young Professionals Program. How did your Pardee RAND experience prepare you for that and for your future work at the UN?

“My OJT was instrumental in preparing me: every project at RAND requires you to be flexible, and each project demands a different set of skills.”

As a Young Professional, I had to be ready for any project role: principal investigator, analyst, project manager. My On-the-Job-Training was instrumental in preparing me for this: every project at RAND requires you to be flexible, and each project demands a different set of skills. And certainly the act of directing oneself through a dissertation concatenates all these different roles within a single project. Further, my first job in the UN was a direct application of my thesis—it’s hard to be better prepared than that!

You spent two and a half years as an Economic Affairs Officer for the UN in Santiago, Chile; what did you do there?

I was really lucky—I could directly apply my thesis work, which evaluated national-scale government programs in India, to my role in Santiago. At the Economic Commission for Latin America and the Caribbean (ECLAC), I evaluated the impact of regional government programs on poverty and entrepreneurship. I also started a line of work involving visual storytelling: transforming poverty analyses into interactive visualizations, so that anyone, government official or interested citizen, could understand how regional poverty changed in the first decade of this century.

In 2019, there was this monumental shift in how the UN was operating: two of its biggest departments (Peacekeeping and Political Affairs are the UN’s bread and butter) were merging, but no one outside the UN was talking about it. Unlike other organizations, the UN doesn’t advertise its accomplishments. In fact, when you don’t hear about the UN is when it’s doing its best work! So a co-host and I decided to become an informal Public Relations unit, shouting about all the incredible work the organization does, to make the United Nations accessible and straightforward. Not from the rooftops, but from a studio.

What was it like creating and hosting a new podcast, presumably while still serving as a UN evaluation officer?

Busy! And, of course, very fun. We got to record in the UN’s news studio, with all the flags lined up behind us. We wanted the first episode to be an introduction to ourselves, and to the UN, so we took the audience on a “tour,” just in time for High-Level Week at the General Assembly—the UN’s version of the Oscars.

What, if anything, from your Pardee RAND experience foreshadowed and/or helped with your transition from research to podcasting and communications?

“At Pardee RAND I learned to present my research clearly, and get a lay audience excited about policy.”

Well, I liked learning about everyone else’s research more than doing my own! In all seriousness, at Pardee RAND I learned to present my research clearly, and get a lay audience excited about policy.

After six more-or-less monthly episodes of UNcomplicated, you got a new job with Science Vs (of Gimlet Media) in March 2020, producing nearly 20 podcasts focusing on the Coronavirus in the four months you were there. What made you take the leap from policy evaluation and podcast hosting at the UN, to behind-the-scenes podcast production?

At the UN, my work was interesting, but it seldom reached beyond the organization. I wanted to “shorten the distance” between my work and the public. So I took a leave of absence and joined Science Vs the day the World Health Organization declared a pandemic! The show switched from an episode on astrology to one on virology, and we reported on the science of the coronavirus as it was unfolding. It was really satisfying to know that our work helped people understand the intricacies of this virus.

Since last September, you have been with FiveThirtyEight.com, an American website that focuses on opinion poll analysis, politics, economics, and sports blogging, working as a producer (and occasional on-air talent) for Podcast-19 — a podcast focused on COVID-19. How would you describe that experience so far?

Intense! We put out an episode twice monthly, so every two weeks I wake up and wonder, “what’s our new COVID angle?!” The team is small: host, executive producer, and myself—so we’re working closely together. It’s been a great blend of independence and collaboration, of research and translation. And I get to talk to some of the smartest people in the world about their cool research.

Your transition to full-time podcasting took place just as COVID-19 was taking hold in the United States, and all of your podcasts since then have focused on the virus in some form or another. What has that been like? What have you learned about yourself in the process? And what do you see yourself doing when and if COVID-19 is no longer a top news item?

I still can’t believe I get paid to read about the pandemic! The hardest part is finding a new angle—everyone is reporting on COVID all the time. In the future, I’d love to focus on local issues. As voters, we get so caught up in the frenzy of national politics, but it’s local government that impacts our lives most intimately.

Your career both before and after Pardee RAND was so focused on research—two years as a research assistant at the London School of Economics after receiving your M.Sc.Econ., a year as a researcher at the Indian Institute of Management at Bangalore, even a double major at Carnegie Mellon University in economics and biology. What, if anything, do you miss from your life in research?

“It’s been a really rewarding experience to work with students as they transform technical research into a compelling, accessible narrative.”

Actually, research is still a big part of my life! Every episode, like for any new line of inquiry, has a driving research question. To address this question, I undertake a significant amount of research—albeit with significantly less pipetting and regression analysis. After conducting interviews, writing a script, and undergoing a few edits, we have an episode that addresses the current question, and, like all good research, raises new ones.

You are now helping current Pardee RAND students communicate their research through one-on-one mentoring sponsored by Career Services—a project that developed in lieu of a virtual Student Research Showcase. What has that been like, personally and maybe even professionally? And how would you compare your Pardee RAND experience with what current students are doing?

I have been having so much fun! I get a sneak peek at the really interesting and relevant research that students are conducting. It’s been a really rewarding experience to work with students as they transform technical research into a compelling, accessible narrative. Pardee students always tackle interesting problems, but as I listened to this year’s presentations, it was truly apparent that the fellows looked around at their environments, at the news, and asked “why is this happening and what can be done about it?” And then went about trying to address those questions.

What advice have you given the students you are mentoring, and what advice do you have for prospective Pardee RAND Ph.D. students, or even your fellow young alumni?

One of the things I loved most about RAND culture was its willingness to “try anything.” I encourage Pardee RANDites to do the same—take on projects that are outside of your comfort zone, either topically or methodologically.