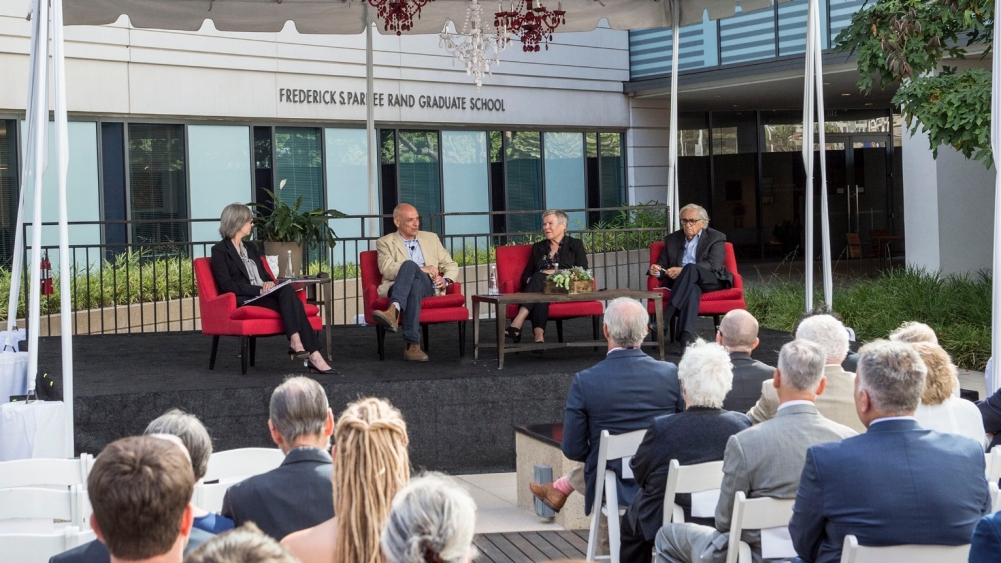 More than 100 guests attended the Friday afternoon talk in the RAND Courtyard.

Each speaker began with their own synopsis of how they perceive disinformation to be a threat.

Schlosser, an investigative journalist and author of Command and Control, argued that disinformation is far from unique to the modern era, but rather part of "an ancient struggle for people to be empowered by having access to information."

In one of his final public appearances as RAND president and CEO, Rich connected disinformation and Truth Decay, noting, "Differences today versus historical periods have convinced me that we can't just wait this out. Even in the period of yellow journalism, misinformation didn't have the lethality it does today with social media."

Staudt asked the panelists if they thought disinformation and propaganda is at an all time high, and what we can do to counter the problem.

Rich agreed, saying, "The reason I think it's at an all time high is because almost every human has the ability to spread disinformation."

While noting that the stakes are higher because of nuclear weapons, synthetic biology, and other pathogens, Schlosser added, "There were periods in history when people couldn't read or weren't allowed to read the Bible. The internet has created the opportunity for all kinds of lying and disinformation, but also for spreading access to the truth."

Returning to the challenges posed by Russia, Gottemoeller said, "In the Soviet era, there was such a search for the truth. When glasnost came along, that thirst was permating society in a way that a lot of us didn't expect. They defined 'the truth' as news from the West, from Voice of America.

"What's been so successful about Putin's disinformation campaign," she added, "is that people are confused where the truth is."

As for possible solutions, Rich added, "It's a two-sided problem, at least. There has to be some change on the consumption side, as well as the production side. Even just labeling the source of information does reduce the likelihood that someone will believe it."

Gottemoeller focused on the need for education, "teaching students how to recognize what is a fact and what is an opinion. Even very young kids can recognize falsehoods rather easily and learn to speak out about them."

Schlosser agreed with Rich about the need to label disinformation.

"If we care about democracy and freedom of speech, we have to expose the lies and hold people accountable to them," he said. "If powerful tech companies were held accountable for the information they're disseminating, that would be a huge start."

Asked whether the panelists thought institutions were viewed as less trustworthy than they used to be, Rich responded, "We know that's the case. Gallup polls are the longest and most consistent in measuring trust in Congress. This has been a two-decade long trend, at least, in which there's been a declining trust in institutions that were previously respected."

Schlosser offered the historical example of extreme legislative corruption in the late 19th century and a series of investigative magazine articles called "The Treason of the Senate," which led to the passage of the 17th Amendment and direct election of the Senate.

"There's something healthy that can come with distrust," he said, "as long as it's a cyclical thing and not a downard spiral."

During the audience question period, alum Jack Riley asked whether political reform could help, to change from the extreme version of "winner take all" that currently characterizes American politics.

Rich referred to a recent RAND report, Truth Decay in Europe, which found disinformation to be less problematic than in the United States.

"There's definitely less effect in countries that have multiparty systems. Two-party systems are more prone to extremist views," he said. "States now are increasingly red or blue. That isn't going to change, because people are sorting themselves."

Gottemoeller added, "Gerrymandering is moving things in this direction, and I have a hard time imagining a bipartisan shift. I like to be an optimist, but at the moment Capitol Hill is not part of my optimism."