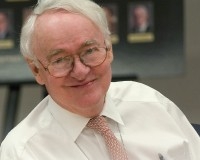 James Q. Wilson, scholar and teacher, passed away March 2, 2012, at age 80. No one knew better than Wilson that from concentrated study and intellectual freedom come ideas that change the world, and he dedicated his life to pursuing these ideas and ideals.

Recipient of the Presidential Medal of Freedom in 2003, Wilson was a long-time member of the Pardee RAND Graduate School's Board of Governors, received an honorary degree from the school in 2004, and served as a RAND Corporation trustee from 1994 to 2004.

"Jim was a towering intellectual figure at RAND," said Michael Rich, president and CEO of RAND. "He was a frequent collaborator — and at times a critic. He made RAND a better institution. He was a scholar in his own right, and not only helped govern the institution but often formally reviewed our research."

As one of the leading public intellectuals of the past century, he published a vast array of books, essays, and articles, each of which has had an enormous influence on the way we understand and appreciate American government and civil society. Wilson's scholarship revolutionized the policy debate: he explored poverty, education, crime and criminal justice, public services, health care, immigration, race, fiscal policy and taxation, and the role of government institutions.

Shortly before Wilson's death, RAND and PRGS established a $1 million endowment in his name to support dissertation fellowships and a permanent library collection of his books, articles, essays at RAND.

PRGS dean Susan Marquis said she still uses Wilson's classic 1989 textbook Bureaucracy: What Government Agencies Do and Why They Do It when teaching doctoral students today.

"Jim's legacy of ideas and ideals will be carried on through his enduring scholarship, and through the newly-established James Q. Wilson Dissertation Award and the James Q. Wilson Public Policy collection at PRGS," Marquis said.

The James Q. Wilson Tribute Fund at PRGS honors his legacy of ideas and ideals.

Contribute to the Fund