The third and final cook-off competition sponsored by Acet for Africa and the Pardee Initiative was structured as a “grand finale” event and took place on October 30, 2016. The top three winning professional chefs from the first two competitions were invited back to compete against each other. However, an added level of difficulty was added in to the final competition: each professional chef was partnered with a street food vendor from Kampala, and all pairs were expected to prepare foods that could potentially be sold by vendors.

This added twist meant the competing pairs needed to balance taste, nutrition and innovation, with portion size and overall cost so that the final products were feasible products for street vendors. While there was no limit on the number of street dishes that the competing pairs could use in the competition, they were expected to discuss the cost of ingredients needed during preparation and what price the dishes could be sold for in the markets.

Marketing for the third competition included radio advertisements, as well as posts on social media, and a prime-time NTV interview with Deborah Cohen and Julius Gatune a few days before the event. Turnout to the event was high with six pairs of professional chefs and street vendors, as well as 9 youth foodies, and 3 commercial product developers. (View a list of all participants and their products)

Other noteworthy dishes included stuffed drumsticks fried with a millet batter (cost 2,000 UGX, sell for 5,000 UGX), sorghum and potato curry with a millet pita bread (cost 3,500 UGX, sell for 5,000 UGX), both English and Ugandan versions of pancakes made out of millet (selling for 500 UGX and 100 UGX, respectively), and a sorghum and chicken curry with millet bhatura.

Many street snacks offered were modifications of currently popular street foods, including vegetable samosas with sorghum, millet rolex (a popular flour-based street food), matooke katago with vegetables and sorghum, and chankitta with cabbage. One chef made a notable entrée with incredible millet linguini noodles (cost 4,000 UGX, sell for 14,000 UGX).

The youth foodies were also requested to make small dishes or snacks that could be sold on the street or out of kiosks. The best youth foodie duo was Sylvia Oile and Mark Aheru, who created stuffed tomatoes breaded in sorghum flour, as well as millet-crusted cookies with beef fillet. Other notable creations included sweet millet chips with a mango puree, a sorghum and millet tart (pizza), a stuffed tomato ball with fried millet, sprouted vegetarian and fish dumplings, ginger millet cookies, and millet and sorghum biscuits with a mushroom gravy.

The idea of using cook-off competitions as a rebranding technique was originally conceived to target middle- and upper-class urban consumers, with the expectation that generating interest in more affluent and sophisticated consumers would cause a trickle-down effect and eventually stimulate demand with lower-income consumers as well. However, in the midst of the implementation process the project team reassessed and decided to take a more direct approach to including lower-income consumers in the rebranding effort.

One of the biggest sources of food for lower-income consumers is street food vendors. Thus, the project team decided to integrate street food vendors into the final round of the cook-off competition by partnering them with a professional chef. In this way, the chefs are able to impart knowledge and experience in culinary preparation and innovation, while vendors are familiar with the prices, portion sizes, and palates that can be expected from this segment of consumers.

Street food vendors are key suppliers of ready-to-eat food for the urban poor and thus an important determinant of diets as they represent a very specific food environment. Because buyers are price-sensitive, street vendors who offer low-cost alternatives can help shift diets. For example, as noted in The Future of Traditional Cereals, when rice prices skyrocketed in the wake of 2007 food crisis, street food vendors in Liberia shifted from rice to noodles made from millet.

A series of studies noted that street foods are a significant source of calories (and income generation) for many urban dwellers, both in terms of energy intake and financial expenditure. A study based in Accra, Ghana, finds that households in the poorest expenditure quintile obtain on average 31% of their total calories away from home, compared to 22% for the top quintile. In Ile-Ife (Nigeria), expenditures on street foods to be as high 50%. At the same time there is very little information available on the contribution of street foods to the daily nutrient intake of consumers. 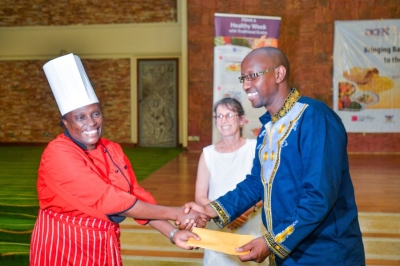 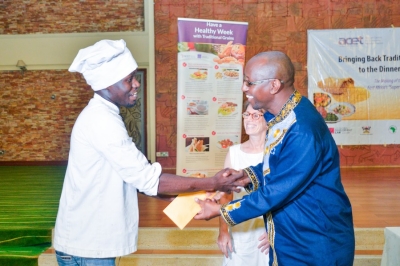 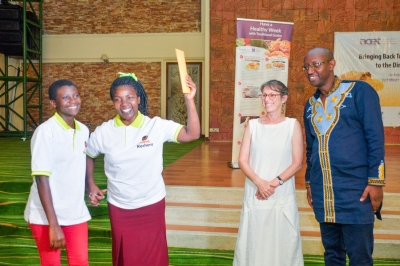 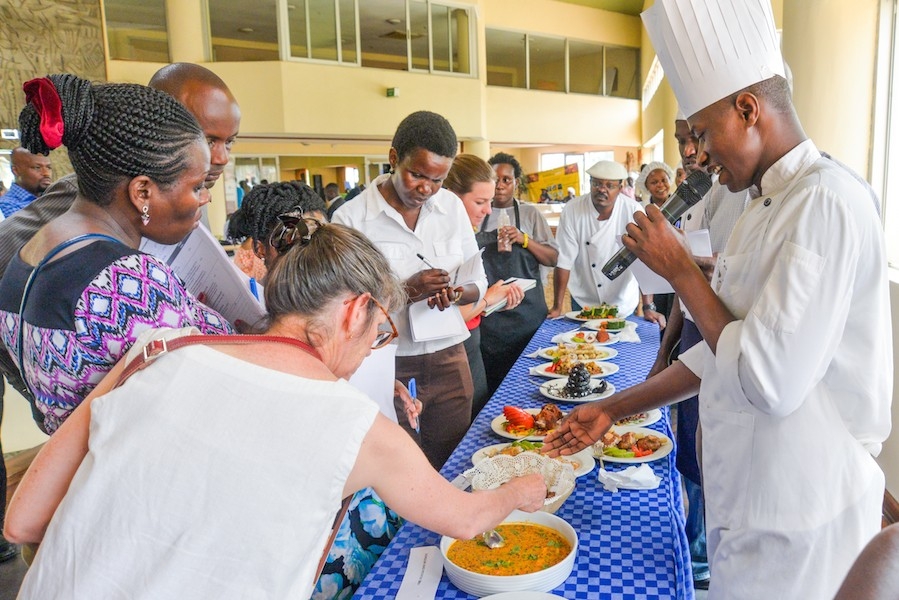 Chefs display and discuss their final creations at the contest 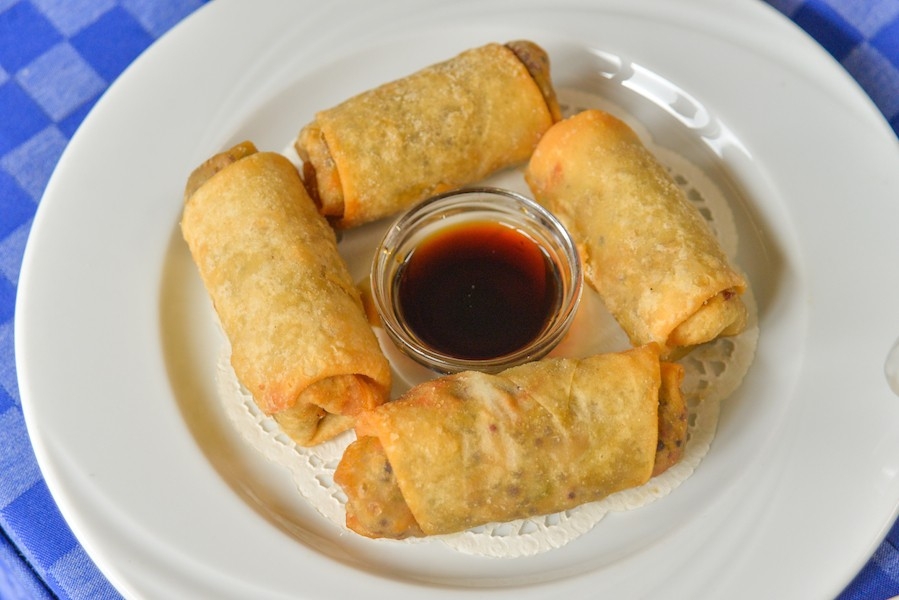 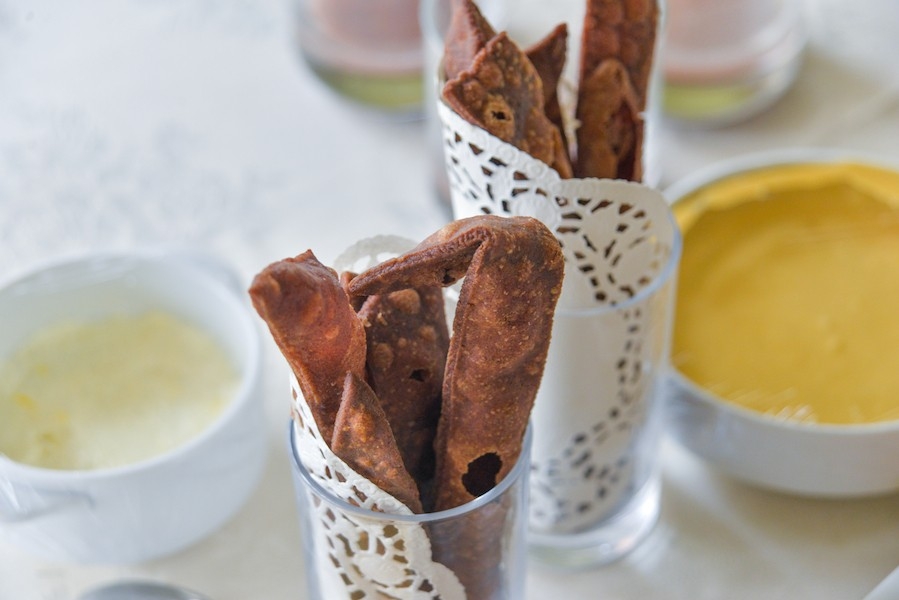 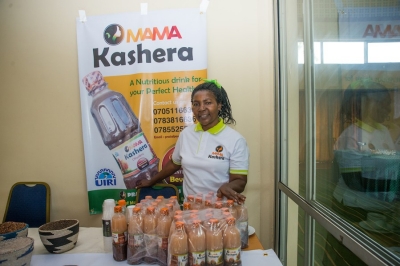 See more photos from the event 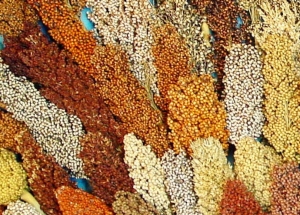 What's So Special About Millet and Sorghum?

Traditional grains have been losing market share to new grains—especially maize, rice and wheat. Yet traditional grains are more nutritious and well adapted to Africa’s agro-ecological conditions. More importantly, with the prospect of climate change, these grains can be key to adapting to this future; they are drought tolerant. Making these grains popular is therefore important for improving food security and nutrition security now and in the future.

Learn more about the project

Superfoods in the News

Our project and competition have been in the news throughout East Africa. Here are a few links.